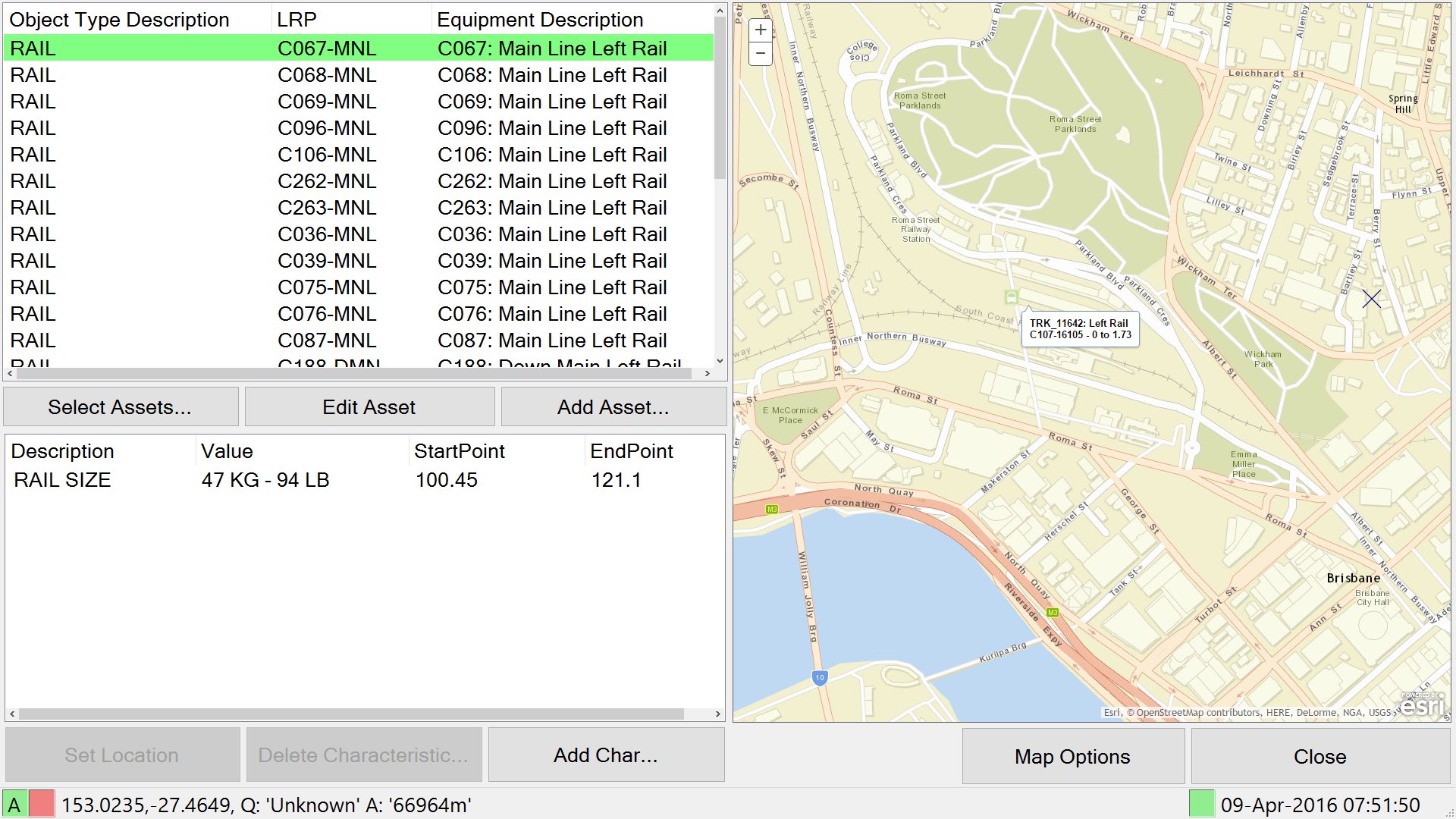 The importance of maintaining correct asset information is a vital key to any business and for QueenslandRail it is especially important given the vastness of the state.  We were contracted to create a platform for monitoring and maintaining the quality of this information.  The project was to consist of tablet based handheld devices with 4G capability that could connect to the internal network and provide the user with up-to-date asset information for the assets near to their location.  The user needed to be given the ability to check the asset’s details and update where necessary and also add photos using the tablet’s camera. High quality dGPS units were to be used for accurate positioning of the assets, with the Windows Location Provider acting as a backup location provider.

To fulfill this contract we created a platform running on the clients Windows 8.1 tablets that were locked down to run only on their network with a whole host of other restrictions in place to provide a secure system.  The platform used .Net 4.0 Winforms (using an MVP pattern) as the application was also required to run in the office on desktops running Windows 7 and required no installation apart from pre-requisites that would be pre-installed by the clients ICT department.  The project was managed and delivered using Scrum and utilised JetBrains YouTrack for the handling of the the sprints along with tight integration with the GitHub repository. 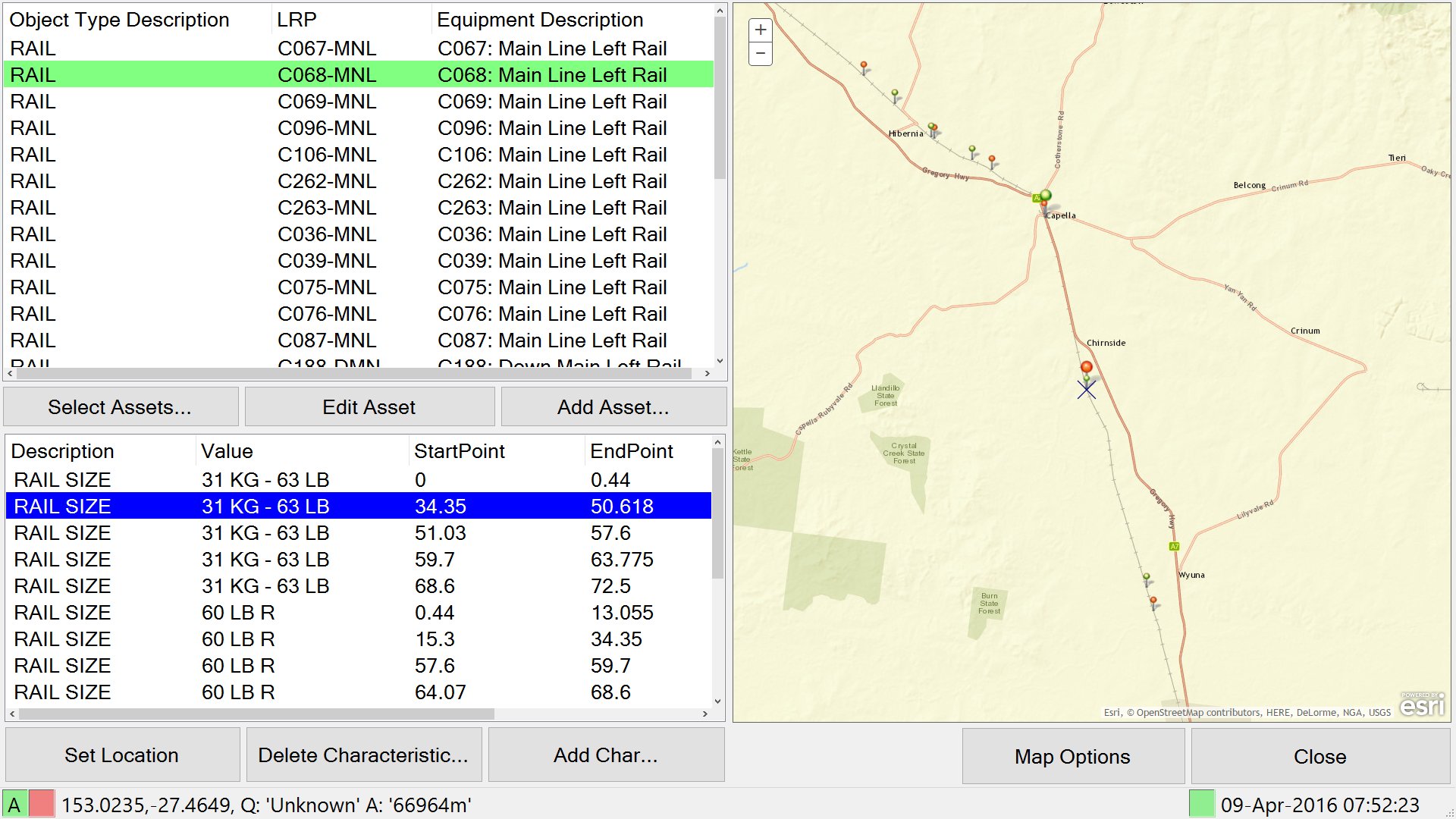 For the mapping we used ArcGIS API for Javascript to interface to the company’s ArcGIS system and to provide the real-time mapping functionality.  Under the hood there is a mix of Javascript with Dojo and jQuery and we used the excellent CEF platform in the form of CefSharp to provide a web browser view that could handle the ArcGIS Javascript.  Previous work in this field was carried out with the Microsoft WebBrowser control, however the default IE engine with the control is IE 7 and due to the restrictions in place on the tablet and desktop we couldn’t change the version through the usual registry changes and using the compatibility meta tag wouldn’t work either in this scenario.  Having said that we’ve found the CEF control excellent in terms of functionality, support for Javascript etc… and of course you get the Chrome DevTools as standard 🙂 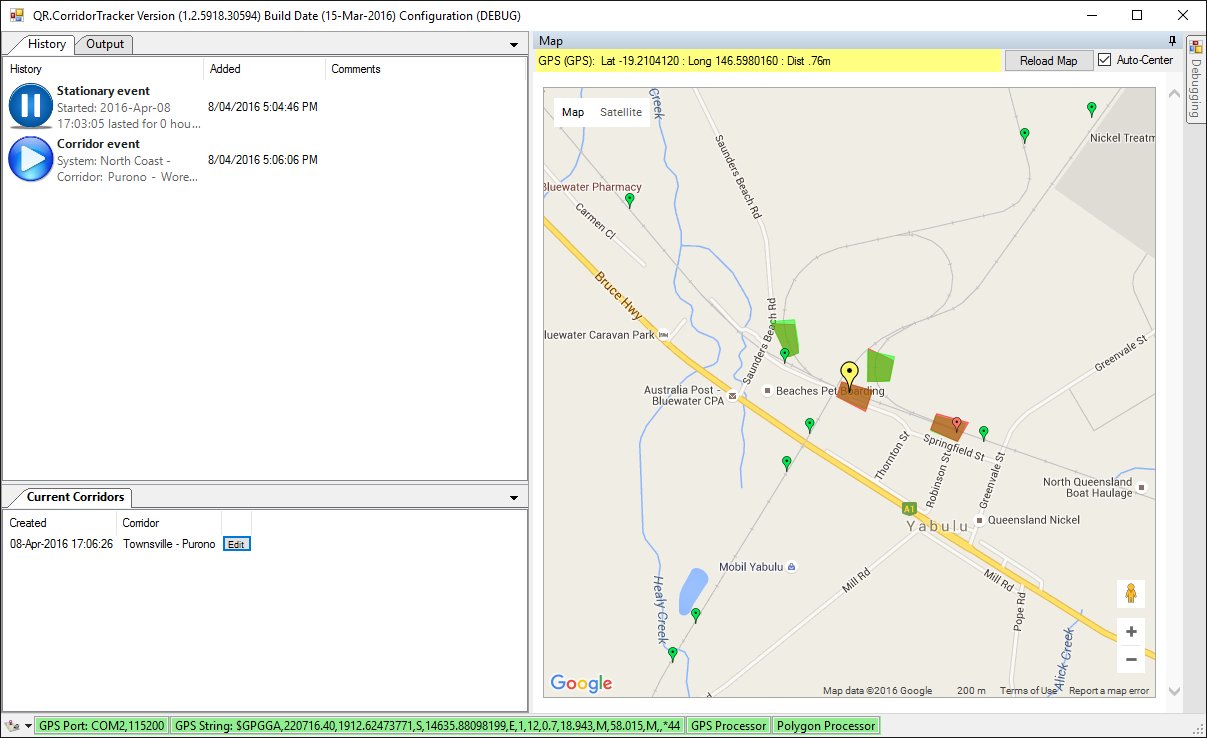 With the ever increasing need for accountability and reporting of time spent against projects\work orders etc…, we were tasked to create an application to monitor and track the company’s manned track recording machine and assign time to rail corridors over the whole of Queensland.

To achieve this we created a .Net 4.0 Winforms application coupled with DockPanelSuite and utilising Google Maps for the real time view of current position, corridors, stations and kilometre posts.  The excellent ObjectListView control was used to present history of corridors visited and also stationary events.  The capture of stationary events was especially important for time reporting as it allows the administrator to assign lost time due to unavoidable delays such as waiting for a train to pass.

At the end of the working day the application creates an Excel compatible spreadsheet (using the library EPPlus)  This is then emailed to the department’s administrator for logging into the system (SAP for example).

Since working on the latest project (Asset Editor), this application will soon be enhanced to enable the use of ArcGIS API for Javascript and remove the need for Google Maps.  This will create a tight bond between the current asset information held within ArcGIS and the Corridor Tracker and will ultimately allow the view of any GIS based objects in the application. 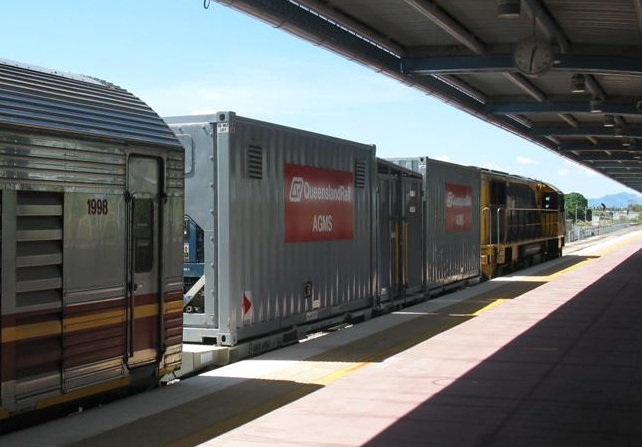 The AGMS2 is the same system that is installed on the Cairns Tilt Train, but with the addition of a generator for supplying 240v. This system also differs in that it doesn’t have a constant power supply like the AGMS1 has, so uses a 12v powered computer to monitor and handle a diesel generator.

The generator is automatically started and stopped depending on it’s location by the use of GPS and uses a 3G connection to provide both measured track data and the ability to remote into the system for maintenace. 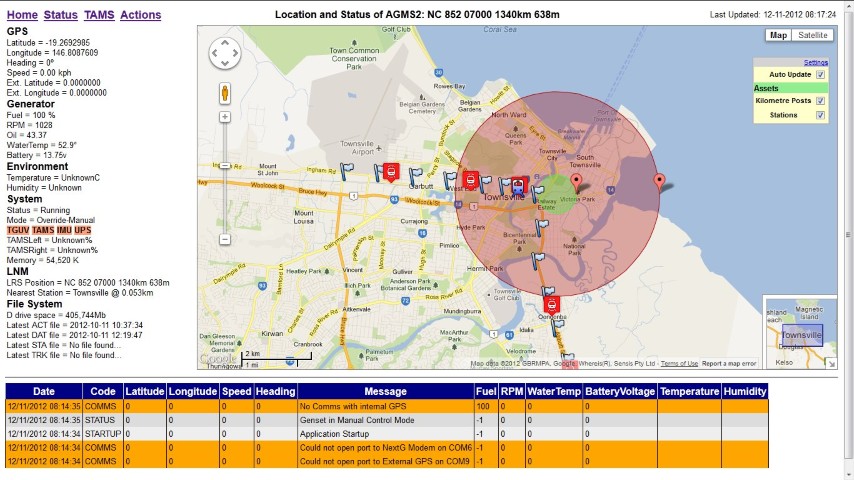 The system also has a built in website (ASP.NET MVC 3) for monitoring and tracking, regardless of where it is.  It uses an embedded Google Maps along with system information from the AGMS2 to plot it’s position along with other pertinent system information.  With configured timetables, the system can track the position of the machine and report the on-time-running of the vehicle with respect to the timetable.  Once a timetable has been complete an End of Run report is produced and emailed out automatically.  The email contains the result of the On-Time-Running along with a number of other pieces of information to allow the user to determine the quality of the run and ultimately whether or not to upload the data from the run into the Back Office system for further analysis.

A number of other emails are also sent out automatically to report progress at key positions on a run and also when problems have been identified, such as low fuel for example. 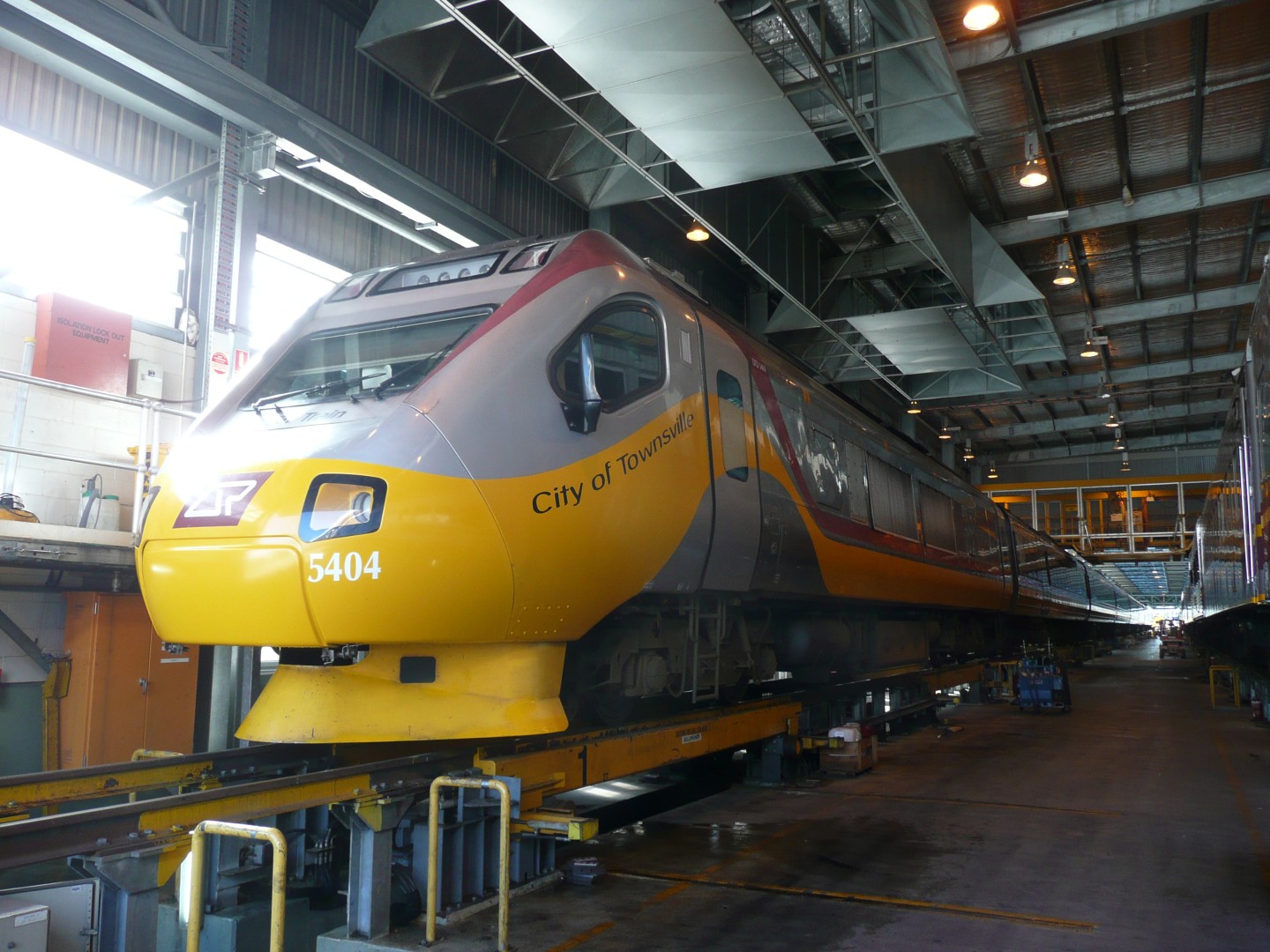 The AGMS1 is an automated geometry measurement system that is attached to a bogie on the Cairns Tilt Train. The system automatically measures the rail during the trains 2 trips a week to Cairns and back on the North Coast Line. The system is a cut down version of what is installed on the AMV, but produces much the same data for the back office systems in terms of monitoring and mainting track quality.
The system uses Wifi to automatically transmit the measure track data to the back office servers ready for the data analysis stage.

Work on this system has ranged from installation, testing, maintenance, problem solving and system development. 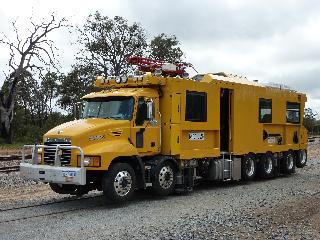 The AMV is a major part of the Queensland contract that we have been working on for the last 5 years. It was delivered to QueenslandRail in November 2009 to begin the commissioning and acceptance stages of the projects.  Once in production the AMV will be used to monitor and report on the condition of the rail network from a point of view of track quality and hightlighting problem areas. The project began for us with a number long term stays in Perth whilst the vehicle was in it’s construction phase and working on the integration of the software and hardware systems at the clients request

On-board the AMV is a complete computer network with servers and dedicated capture systems along with sophisticated user workstations that provide the operators with real-time feedback of the condition of the track. Post-anaylsis of the track data is performed in the Back Office system which comprises of the application written by Serco Rail Technologies (now Balfour Beatty Rail Technologies) which we worked on extensively in the UK. The software work that we are carrying out for the project ranges from simple applciations for data backup and tools to assist the AMV operators in day to day usage of the vehicle, to full integration, testing and bug fixing of the on-board systems and back office software

This was a small website that we were asked to generate quickly for the sale of a house in Australia. The sale of the house was completed successfully mid-2009.  It is a very simple website, written in plain HTML with CSS and was written within a day

We’ve recently started a contract for Queensland Rail, all the way out in Australia. The contract is to assist in the smooth running of the project that we were involved with from Serco Rail Technologies.

The core part of the project is a track measurement system designed for the Cairns Tilt Train that runs from Brisbane to Cairns, but also has many other applications in the rail industry.

Creation of a brand new ASP.NET 2.0 website designed to be the oracle of imformation for people and families looking at emigrating to Australia.

As with other CodeConsults websites, this one is being designed and built using ASP.NET master pages, targetted for both IE and Firefox and fully standards compliant. It also incorporates some neat little screen scraping and AJAX code that actively gets website content. It is currently, still in development and is targetted for a Q2 2008 release to the public.

Creation of a new ASP.NET 2.0 website for a new up and coming Chauffeur service.
The website was designed and built using ASP.NET master pages which enabled it to be designed and built well within the client’s deadline and budget. The design is CSS driven so that it works seamlessly on both Internet Explorer and Firefox.

A 6 month contract involved with the creation of C++/C# plug-ins for the display of track measurements via a third-party visual inspection application for a major railway supplier abroad.

The writing and interaction of both managed and un-managed code within each plug-in has been a center point for this contract, due to the visual inspection application being written solely in C++.

In the latter stages of the contract the work has evolved into a pure C# application integrated with a link node model to represent a rail network for route selection. The contract also required the updating and performance tuning of a processing application that takes rail track monitoring files and uploads them to a data store which could be Microsoft SQL Server, Oracle or any other type of database.

UKPlus
Contract involved the creation of a local based aggregation website UKPlus using .NET 2.0 and SQL 2005.

The Website also required the gathering of local based data from a variety of Website/RSS sources using a Windows Service. The Windows service periodically gathered local based stories, weather, blogs, news and sport articles. This data was then processed to fit within a generic database structure so that the data could then be easily extracted by the front-end system.

SEO and accessibility were a primary concern with this website. From the SEO perspective this entailed a page based meta-data system that localised the each page’s metadata giving better searchability from the search engines. Clean, human-readable URLs were adopted to also give better searchability. For accessibility, the website employed multiple stylesheets that the user could easily switch between.

Lasting Tribute
The contract also involved the initial release of a UK and celebrity based Obituary site Lasting Tribute using .Net 2.0, SQL2005, NHibernate and AJAX. This last project was the first project that the company ran as an Agile Developement Project and used Continuous Integration software to create automated builds and test scenarios.